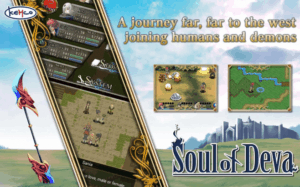 New month means new work by Kemco that, as is normal, is released fresh development on the Play Store, called Soul of  Deva : clearly the word “new” refers to the fact that it was published recently, but basically it is still a JRPG that old-fashioned, albeit with some innovative element, does not differ at all from the usual formula proposed monthly from the Japanese study, which is undoubtedly a plus for the purists of the genre.

The plot of Soul of Deva tells the story of a group of people made ​​up of demons, humans, and demons means traveling to Raglis , in the far west. Each member of the group has its own objectives, priorities and secrets, and in particular “the savior,” girl traveling with the company unlikely, hides a mysterious power.

The features that distinguish this work from Kemco other productions always of the same company are basically three: the turn-based battles are now more dynamic and tactical , as you can move from box to box and even put physical objects to defend against enemy attacks ; the Soul Arm , or the new weapons in the game, will be upgraded with the Soul Point obtained in battle and the Soul Orb to use magic, and not just changed the canons shops in town. Last, but definitely less important, is the ability to capture objects and power-ups every thirty minutes by simply opening the application.

A World Populated by Demons and Humans
In a world where demons attack humans, the humans live in daily fear of them.
Raglis, an organization working to help those humans, is preparing to welcome Sania, a young woman with the power to destroy those demons. Sania is known as ‘the savior’.At one point, when Sania’s life is in danger from the demons, a young half-demon called Shin suddenly appears, and his help allows Sania to escape. Shin and Sania, and an odd group of characters who on the surface have nothing in common, set out towards Raglis, far away in the west..

Tactical Battles: Moving and Battle Arts
During battles, both enemies and allies can move around their own battle territory. This tactic is known as ‘moving’.
Also, items known as Battle Arts (BTA) can be placed in allied or in enemy territory, and have a wide range of effects.
Enjoy technical and strategic battles by making use of both ‘moving’ and Battle Arts.

Soul Arms and Orbs
Each character has a weapon called a Soul Arm. Soul Arms can grow and develop by using Soul Points, which are gained after battles.Also, by equipping a Soul Arm with an Orb, you become able to use an Occult Art corresponding to that Orb.
Develop and strengthen your weapons to best fit your characters!

Chances to get rare items, once every 30 minutes!
By using the Hourglass of Fortune, you can bring about bonus encounters, which are a chance to gain rare items, including Atoma Slips.You can use the Hourglass of Fortune once every 30 minutes, so by checking the app frequently, you might find yourself able to progress through the adventure more smoothly…
By using Atoma Slips, you can purchase Soul Points and special equipment, etc.
You can gain Atoma Slips from bonus encounters and while playing the game normally, but optionally, you can also buy extra Atoma Slips through an in-app purchase.