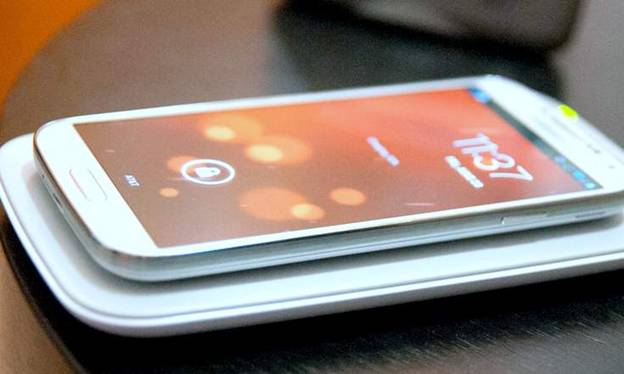 Lenovo A6000 was launched this year in the month of January and featured as the cheapest 4G enabled smartphone in the market, it ended the era of Micromax’s Yu Yureka  which was the lowest priced 4G enabled smartphone till then. You can find deals online to lower the price, like a Lenovo discount code . Lenovo A6000 was launched having a 5.0 inches IPS capacitive touchscreen powered by Snapdragon 410 Quad-core processor. The phone has an 8MP camera with LED flash light. Lenovo launched this smartphone to tap into the customers looking for 4G handsets, even though the 4G Networks are available in a few states of the country, but soon enough the 4G facility will be available throughout the country and it appears Lenovo Mobiles wants to dominate the 4G mobile segment. 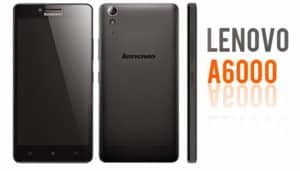 The phone looks exactly same like the Lenovo A6000 Plus and you can’t tell the difference between them if they are kept near each other. The phone has a perfect ergonomic design and the plastic based back cover is provided with a matte finish. The front side display of the phone has three soft buttons located at the base while Dolby digital plus speakers are located at the rear side of the back panel. The phone comes with two SIM card slots and an option to expand it using the MicroSD card slot provided at the back of the phone.

The phone is handy as its dimensions are 5.55 x 2.76 x 0.32 inches while it is also very lightweight having a total weight around 128 grams. The phone comes in Black color only. 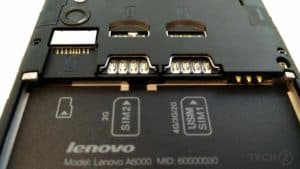 The Lenovo A6000 is provided with 5 inches IPS capacitive touchscreen with 16M colors providing screen resolution of 720 x 1280 pixels. The phone is multi-touch enabled and has approximately 294 pixels per inch, thus producing sharp and bright colors. We did not notice any problems with the viewing angles of the phone and there was no pixelation issue whatsoever. The thing to observe is that the display is not protected by Corning Gorilla Glass and you have to protect it by using screen guards. We did not find much difficulty while using the phone in bright sunlight as the screen was not reflecting much. The only problem we saw with the display was that it attracted a lot of smudge and finger marks.

The Lenovo A6000 comes with 8GB internal memory which can be expanded to 32GB using MicroSD card provided on the back side of the phone. The phone also comes with a 1 GB RAM.

The Lenovo A6000 is powered by Qualcomm MSM8916 Snapdragon 410 Chipset with 1.2 GHz Quad-core Cortex-A53 processor. We had no problem with the working of the phone and we did not notice any lag or delayed touch feedback when swiping through various screens on the phone. We played heavy games on the phone and it ran smoothly, and the overheating of the phone was also in control even when we played the game continuously on it. We watched heavily encoded videos on the phone and it was played perfectly for lower quality videos while the phone struggled a little when we played 1080p files on it while the videos were shown without any color bleeding issue.

The Lenovo A6000 is provided with 2300 mAh Li-PO battery promising standby time up to 264 hours on both 2G and 3G networks while talk time up to 22 hours on 2G and 13 hours on 3G network. We performed loop test on the battery and found out that the battery worked really good if you consider the budgeted price you get to have it. 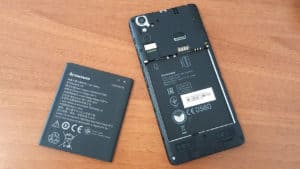 The phone runs on an Android 4.4 KitKat platform, but the thing to see is that it’s heavily customized by Lenovo. The UI skin present in the phone is developed by Lenovo’s software team. The UI doesn’t have an app drawer and so could take the time to get used to by the users who have been using Android’s UI previously. All the widgets and icons are present in the home screen itself. The phone comes pre-installed with two themes that can be customized while there is no option to download other themes. The phone comes pre-installed with a lot of third party apps and you can uninstall them if you want to free space. Lenovo has focused on giving a very smooth appearance to the UI and you can feel it using the phone.

Lenovo A6000 4G smartphone Review says that it is a balanced phone having a special feature of 4G connectivity at a very competitive price.Currently, Lenovo A6000 Price in India is Priced at Rs.6,500.  Even if you don’t get the 4G network in your city this phone will work perfectly for you. The phone has an amazing display and a sound processor, which gives you a seamless experience. Being an entry level smartphone, the value offered by this set is really something to seek for. The phone has received a feature score of 68 on Pricejugaad.com which gives it an average outlook while it has obtained 71 in the review score which gives it better than average outlook. If you are looking for a decent smartphone with a 4G connectivity in a short budget, then this phone is made just for you.